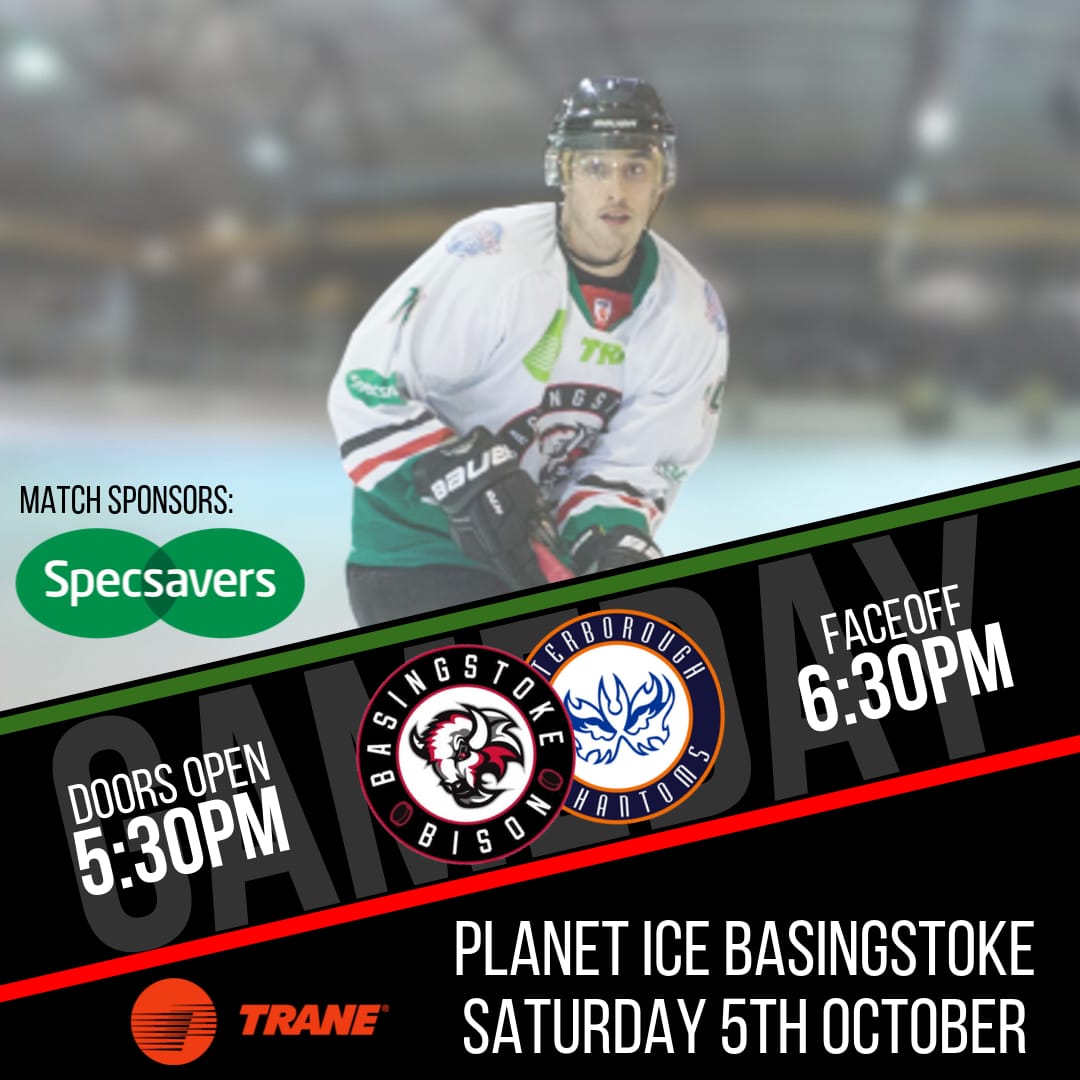 In the first of four home games during October, the Trane sponsored Basingstoke Bison welcomed pre-season foes Peterborough Phantoms to town and were looking for immediate redemption, having lost 5-1 away in Peterborough the previous Sunday. The Bison were sat 6th in the NIHL National League heading into the contest and hoped to continue their unbeaten home start to the campaign. The home side were without forward trio Oscar Evans, Bayley Harewood and Paul Petts in their pursuit of two huge points. The visitors were missing Corey McEwan and Connor Pollard, but added Joe Gretton and Kieran Raynor as reinforcements. With Alex Mettam ready in the Bison net and Jordan Marr starting for the Phantoms, the game began.

The opening minutes of the game were quick and end-to-end, and at 2:50 the first goal of the contest arrived as import forward Petr Stepanek (Susters, Buglass) scored from close range to put the Phantoms ahead. Thankfully, the Bison faithful weren’t left despondent for too long as Richard Bordowski (Tait, Harding) levelled the scores at 1-1 with a goal timed at 5:59, courtesy of a neat backhand finish after hard work down low. The rest of the period saw little in the form of major scoring chances, with both teams receiving a single penalty each as Bordowski received 2 minutes for Tripping at 6:55 and Phantoms’ defenceman Tom Norton also received a Tripping penalty at 16:15, but both were easily killed off as the first period ended 1-1 with the Bison being outshot 10 to 4.

As the game moved into the second period, some fans had barely made it back to their seats when the Bison went 2-1 ahead through Ashley Tait (Dewey, Jones) at 20:39. Captain Elliot Dewey shot from just inside the blue line and the puck bounced off ‘Tait the Great’ without him even realising, looping slowly past a stricken Marr and into the net, sending the home crowd wild. A handful of penalties followed, mostly on the Phantoms, as the Bison looked to increase their lead and only the heroics of Jordan Marr prevented them from doing so. His best save came during 4-on-4 play whilst George Norcliffe and Glenn Billing sat Charging and Hooking penalties respectively, with Liam Morris and Ryan Sutton breaking out on a 2-on-1 but Sutton’s five-hole shot was stopped. Eventually the pressure became too much and the Bison extended their lead to 3-1 through George Norcliffe (Klejna, Sampford) at 33:44. After great hustle down low by Klejna, he emerged from behind the goal line and fed a backhand pass across the face of goal, which was tucked home by Norcliffe to the delight of the home fans. Unfortunately, the two-goal lead lasted less than 4 minutes when a mistake by Dewey led to Nathan Pollard and Petr Stepanek breaking away 2-on-1, and Pollard buried the puck behind Mettam at 37:23. This late goal left the Bison with a fully deserved 3-2 lead going into the second period break, having outshot the Phantoms 16-8 in the second frame.

The final period of the game began in a frantic fashion, with fast flowing hockey and barely a stoppage in play until 45:41, when Bradley Bowering received a 2 minute Tripping penalty. The Herd then set about scoring the game’s first powerplay goal and immediately it arrived, thanks to George Norcliffe (Jones, Klejna) at 45:54, as he tipped a blue-line blast from Jones past the unsighted Jordan Marr in net for his second goal of the game. The crowd erupted with joy as the Bison doubled their lead to 4-2, and minutes later they were celebrating once again as Alex Sampford (Bordowski, Tait) scored the Bison’s fifth goal of the night at 48:49. After hard work in tight by the Bison forwards, a shot rebounded in front of Marr and Sampford battled hard to poke the puck home, extending the home sides advantage to three goals.

As the game entered the final five minutes, tempers threatened to boil over when Raynor took out Hallam Wilson unnecessarily and received a 2+10 penalty for a Check to the Head, whilst Liam Morris managed to talk himself into a 10 minute misconduct penalty for Incitement.

The Phantoms took their time-out with 70 seconds remaining in the game but to no effect as the clock wound down, and the Bison faithful stood in applause to the customary sound of the Great Escape theme song as their team completed a thoroughly deserved 5-2 win over the Peterborough Phantoms and moved up into 3rd position in the league.