In light of the decision that our landlords Planet Ice have taken with regards to the 2020 / 21 season and league play not commencing until at the earliest 1st January 2021, as club we support and respect their decision whole heartedly and confer that in this ever changing landscape we must take every step possible to ensure that the safety of all is paramount be it... 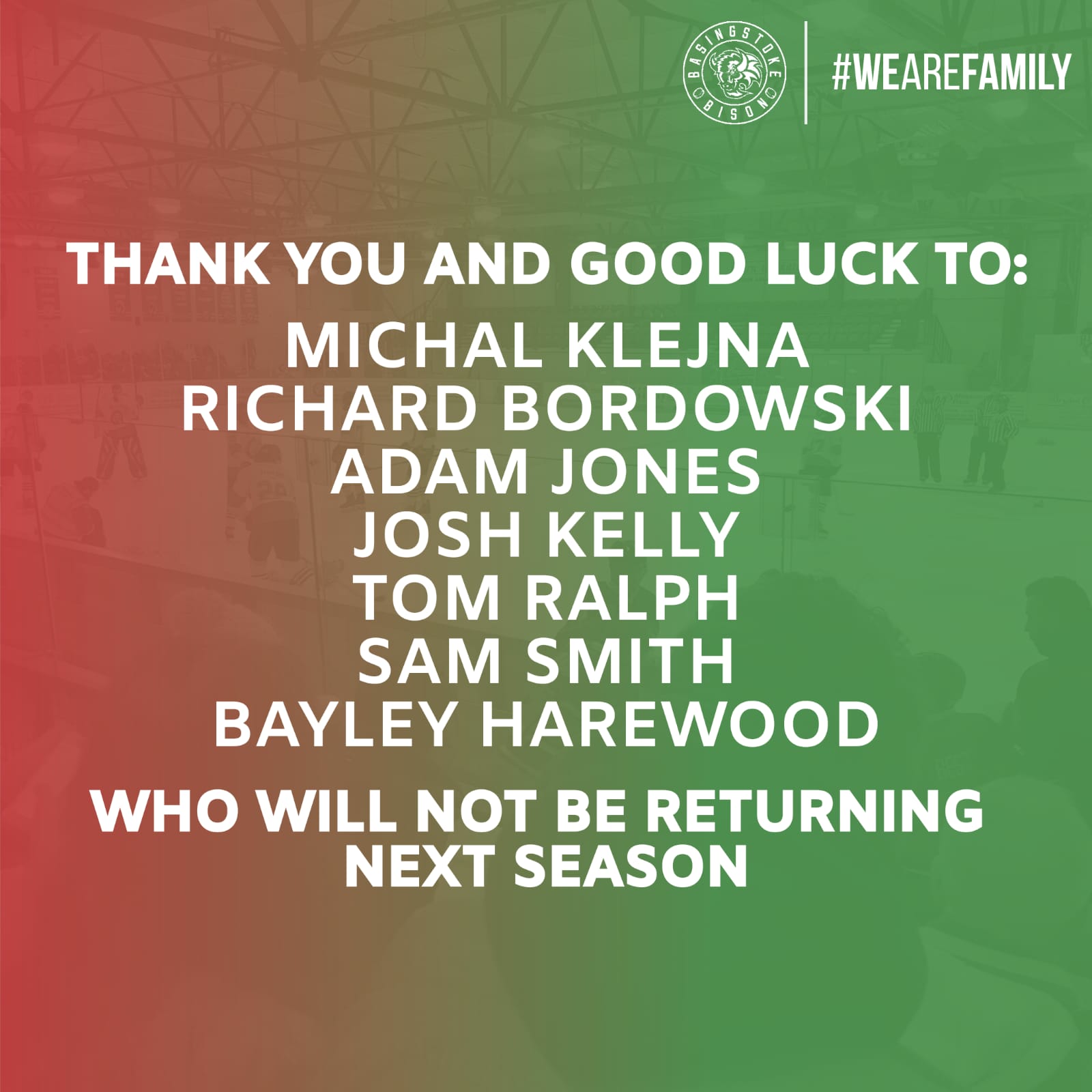 As announced last week recruitment of the 2020 / 21 Trane sponsored Basingstoke Bison roster has been ongoing but as there will be new players arriving there will also be players moving on.

We can now confirm several players have departed the club and will not be icing in a Bison jersey next season.

Slovakian forward, Michal Klejna has confirmed to Coach Tait that he will be retiring from playing and he had this message for the Bison fans.

Hello everyone,
I would like to announce not the easiest thing in my life as I have decided to finish my hockey career for now. This decision came from many reasons and I was thinking about it for longer time.

I would like to say big THANK YOU to the organisation of Basingstoke Bison(the owner, coaches, back room staff) for the chance to play for this great team, teammates whose made it perfect time together, all the fans and people around the hockey in Basingstoke that are loud and proud, always.

At best it is necessary to stop, I can say that these two seasons were my best in my hockey career. I enjoyed playing hockey again and I am happy to end this part of my life as the BISON.

Never say never, I have no idea what will be in couple months, but maybe I‘ll change my mind and will want to return to play again.
But for now, for many of you won't understand that, I want to start my new career, career of ice hockey referee.

I wish you all the best and the most important to stay healthy.

Hope to see you soon again

“Michal not returning is obviously disappointing. I think he's arguably been one of the best imports in the league over the last 2 seasons. He has been a pleasure to work with and will be missed”.

Our second overseas player from last season Czech star Richard Bordowski has also confirmed that he will be not be returning to play in the UK and Richard had this to say to Bison fans:

“It was a great experience playing in the UK and I have really enjoyed the last 2 years playing for Bison, thank you to Coach and the players and I wish the fans good
luck and stay safe!!”

“I think Richard was one of the more exciting players to watch whilst he's been here. When he got going with his speed you could not stop him. He has been easy to work with and we wish him all the best for the future”

The third player not returning to the Bison is British born defenceman and club Assistant captain Adam Jones who has agreed a deal to play in a higher league in European hockey next season.

Adam had the following message of thanks to pass onto the Bison fans.

“I have really enjoyed the past two years with the Bison. This team and organization has become like a second family to me, and although I am looking forward to what comes next it was a very difficult decision for me to leave and will truly miss everyone involved. Basingstoke will always keep a special place in my heart and I would to thank the fans, team staff and my teammates for making the last two years so enjoyable”.

On Adam’s decision to move to a higher league Coach Tait had the following to say,

“I was always aware of Adam's playing aspirations and whilst obviously he's going to be difficult to replace, he's earned the chance to move on and further his career. He's proven to be one of our most consistent performers and probably led the team in ice time. I think that speaks for itself. Having stood where he now does, I'd like to wish him the best of luck on the next part of his career”.

Coach Tait also confirmed that Tom Ralph, Josh Kelly, Sam Smith and Bayley Harewood will also not be returning to the Herd next season.

Coach Tait commenting on the players that have been released said,”

“Ralphy has done a great job for me in his time here. I think given the circumstances and geographical issues it was going to be difficult to maintain the travel for him. For me limiting the time you get to work with more senior players has been difficult and i think that was in both our minds”.

With regards to Josh, unfortunately Josh felt he wanted to play more and with the guys we have coming in I wasn’t going to be able to get him the ice time he wanted so he
has decided to move on”.

Sam's at a time in his career where he needs to play as much as possible. Unfortunately, there are guys who will play ahead of him again this year and i had that in mind when putting things together this year. He is a talented player and i wish him every success for the future”.

Bayley is a massive talent and this was a really tough decision for me. Unfortunately, again I don't feel bringing him back would have been beneficial to either of us as accommodating his ice time has been difficult and he is another guy that needs to play. He's someone I'd like to revisit in the future but currently needs to develop and i wish him all the best for the upcoming season”.

Everyone at the Bison would like to send their thanks to all those players who are retiring or moving on, for their services and commitment whilst wearing a Bison uniform, we wish them the very best in the future both on and off the ice.

On Thursday morning exclusively in the Basingstoke Gazette reporter Graham Merry will be unveiling our first new signing for the 2020 / 21 season.